Owner Spotlight: A Passion for the Rare Lagonda

We would like to introduce some of the BookAclassic car owner community: passionate classic car owners that have registered their classic and vintage cars to the platform.

We have asked our delightful owner Scott, a proud owner of a 1968 Aston Martin DB6 Vantage, a Lagonda LG6, a Lagonda DB2.6/3.0 Brooklands Drop Head (arguably one of the rarest Lagonda's out there, having been owned by Sir Peter Ustinov and believed to be the reason Prince Philip bought his identical car), and a Lagonda DB3.0.

Scott lets us know his reason for joining BookAclassic: "I'd be delighted if people got to enjoy and see the cars". He has provided us with a little background and detail as to how he acquired his lovely fleet.

"My first car when I was in my early twenties was the Aston Martin DB6 Vantage I bought back in 2002.  I won't deny that this is quite an unlikely first car but I managed to justify it in my own mind by the fact that there wasn't any road tax on classic cars and the insurance is generally more reasonable.  Plus I felt that a classic car would hopefully retain or increase in value whilst a newer car suffers all the usual depreciation issues.  Back in 2002 they were obviously considerably cheaper than they are now but also the DB6 was a good fit for me, it had all the stylish looks of the DB5 at the front but with the more aerodynamic rear Kamm tail which made the car handle much better at high speed.  Additionally it was better engineered and had about 6" of so of extra leg room for the rear passengers over the DB5 so was a true Grand Tourer.

Although I know that I was probably self-justifying the purchase of a pretty ridiculous car it proved to be the best of acquisitions.  She is a simply stunning car, beautiful to drive and throughly enjoyable. She's been driven all the way to Inverness and other parts of Scotland and regularly down to Devon and I've driven her at many of my friends weddings at their request. As result of this purchase I also ended up founding and running the Aston Martin Owners Club in London, aptly we called it Area 00 after we spotted a gap in that London had a very large population but was split into all sorts of Home Counties regions and had no central base.  It wasn't really practical to go to a meeting that was an hour or two out of London.

Lagonda has been overlooked and understated

At the time of the start of my relationship with my wife she happily recalls to people that I told her "you go before the car goes".   This may sound rather harsh and was of course in jest but I'd seen too many friends get married and the sports car head off to the graveyard of new ownership when children came along, this was my first car and going nowhere! 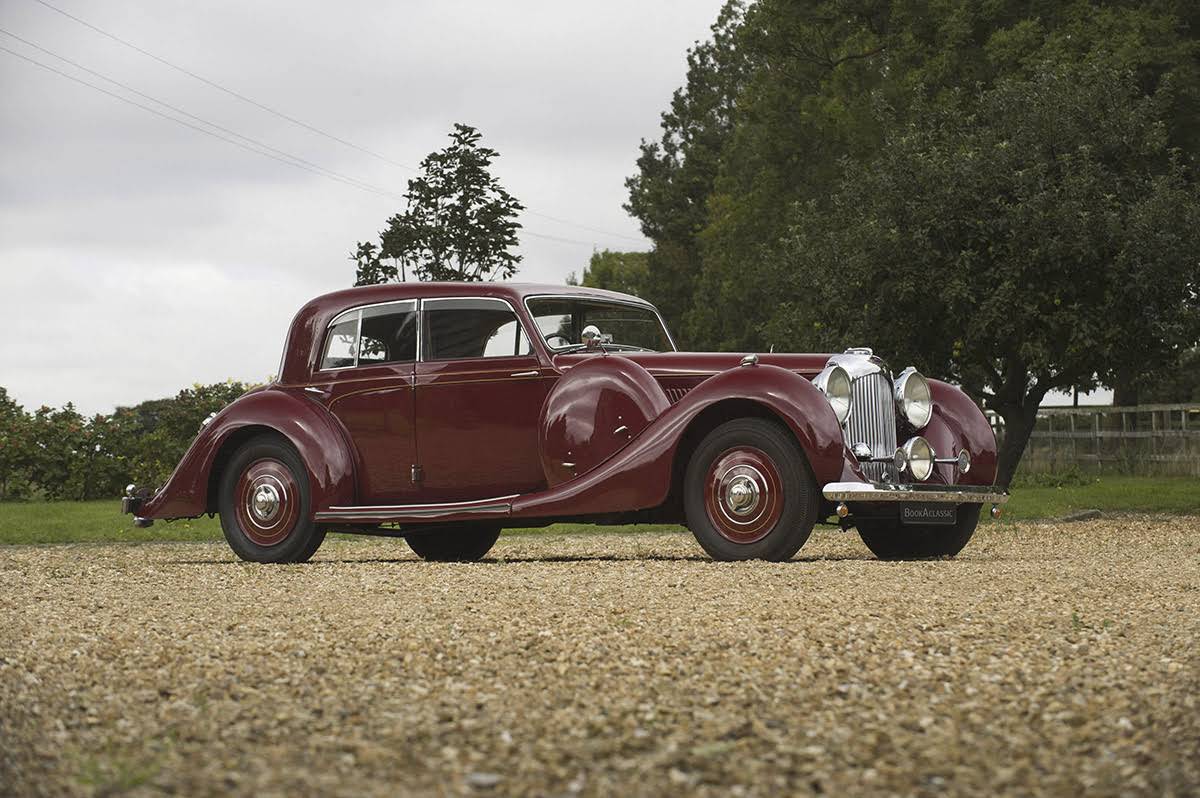 Having been very involved in the Aston Martin Owners Club for a number of years I've made some very good friends and through this one of my very best friends then persuaded me to purchase my first Lagonda, the lovely Lagonda LG6 as my 40th Birthday present from my wife.  The reason for moving into Lagonda's is that the brand has been owned by Aston Martin for over 70 years and hence it's officially called Aston Martin Lagonda, however it's very much been understated and overlooked by buyers who have pushed the prices of Aston Martins to very high levels in recent years whilst Lagonda motor cars have languished in comparison.

Many of the Lagonda Cars from 1947 when purchased were in effect Aston Martins, produced using many of the same parts, engines and engineers just in much smaller numbers.  As such I thought this was a hidden opportunity to effectively acquire a car that is in all intense and purposes an Aston Martin and that these cars will increase in value in the future as people get priced out of what they consider a true Aston Martin, they'll have to look elsewhere.

A lady with a significant provenance

A few years later I spotted the amazing DB2.6/3.0 Brooklands Drophead.  Although she's needs some work and the engine is currently being rebuilt, this is a car with significant provenance, in fact I would argue it's one of the rarest Lagonda cars available.  Not only does it have a famous owner in Sir Peter Ustinov but it's also believed to be the reason Prince Philip bought an almost identical model as he and Sir Peter were members of the same lunch club.

My car is also the ex. London motor show car and one of the Brooklands of Bond Street 16 specials they had bodied at Tickford, 10 in drop head form.  It was sold when new with the 2.6 litre engine on the understanding that when the VB6J 3.0 engine became available this would be fitted. Note the engine bay with the 2.6 litre car radiator, the earlier style thermostat housing.  The oppulent interior with leather and walnut and the wonderful early style seats with two arm-rests.  This is a very special car indeed, even if the engine did blow upon my second and last ever outing in her. 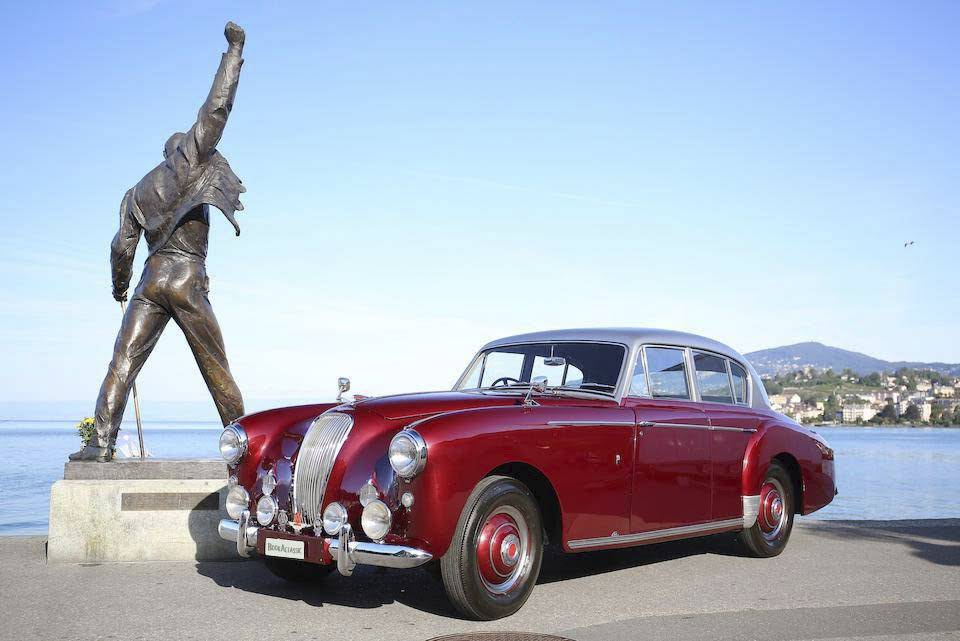 Lastly I've added the lovely Lagonda DB3.0 Saloon to my collection only last year, where she'd spent her life in Switzerland as part of the private collection belonging to Claude Nobs, founder and organiser of the Montreux Jazz Festival, who is believed to have acquired it in 1962.  It's still in immaculate condition in a lovely paint dual tone.

With David Bowie, Count Basie and Rolling Stones in the backseat
Importantly this car also has a great history which again I thought was overlooked. Mr Nobs began to use his Lagonda to pick up the Festival's performers at Geneva Airport. He collected the Rolling Stones in 1964 for their show in Montreux, as well as Petula Clark, Erroll Garner (in 1966, for 'La Rose d'Or') and Aretha Franklin in 1968.  Other superstars who have graced this Lagonda's rear seats include Count Basie, Ella Fitzgerald, Duke Ellington, Oscar Peterson, Nina Simone, David Bowie, Freddie Mercury, etc. A TV Suisse Romande video shows Ella Fitzgerald alighting from the Lagonda.

Other than these lovely cars I run a fleet of classic Long Wheel Base (LSE) Range Rovers made at the end of the run of the faithful first Range Rover model in 1993/1994 which I love, they seem positively modern in comparison!"

Do you own your own classic, iconic or vintage car? Why not register onto BookAclassic's booking platform to receive exciting bookings with your car? Register your car here !